What Is Glaucoma? 5 Things You Should Know

According the World Health Organization, glaucoma is the second leading cause of blindness in the world. Although an estimated 2.2 million Americans live with glaucoma, nearly half are not aware of it. There is no cure for glaucoma, so it is imperative to diagnose it as early as possible in order to prevent further damage to the eye.

Unfortunately, many people are not well-informed about glaucoma and therefore do not understand its risks if left untreated. The most effective for detecting glaucoma is a dilated eye exam, a procedure that uses a tonometer to measure the fluid and pressure in the patient’s eye. However, dilated eye exams are performed less often than they should be, even among people who go to the eye doctor regularly. Therefore, it is important to be informed and aware of the risks of glaucoma. Here are five things you should know about it:

1. Glaucoma is caused by a buildup of pressure in the eye.

Intraocular pressure maintains the balance of the vitreous and aqueous fluids in the eye. Vitreous humor, found at the back of the eye, holds the retina in place. It is present at birth and generally does not move throughout a person’s lifetime. Aqueous humor is found at the front of the eye and circulates through it in order to clean and nourish the lens. The ciliary body, also located at the front of the eye, is responsible for producing aqueous humor. In a healthy eye, fluid is produced and circulated at the same rate at which it is drained.

Fluid in the aqueous humor first drains through the Trabecular Meshwork, an opening at the angle where the iris and the cornea meet. Fluid drains through this soft tissue and into the Schlemm’s Canal, where it enters the bloodstream. If these areas are blocked, closed, or otherwise unable to drain fluid as quickly as it is produced, pressure begins to build within the eye, causing immediate or gradual damage to the optic nerve.

2. It may take many years to show symptoms of glaucoma.

Although some types of glaucoma may cause immediate and significant changes in vision, this is not always the case. Vision loss due to glaucoma is often a gradual process as a person’s eyesight begins to narrow and worsen. Other symptoms include: “halos” around lights, tunnel vision, eye pain, redness, headaches, blurriness, hazy or cloudy eyes, and loss of peripheral vision. 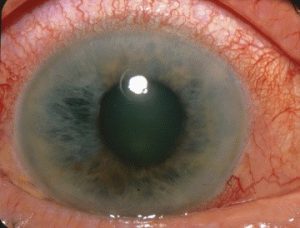 3. Glaucoma comes in many different forms.

Angle closure glaucoma can be caused by structural abnormalities in the eye, a small opening, age, dilated pupils, and significant increases in pressure in a short amount of time. Symptoms include severe eye pain, nausea, bloodshot eyes, and blurry vision. If you experience any of these symptoms, seek immediate medical help. If quickly treated, it is likely the pressure can be relieved, preventing further damage. If untreated, blindness can occur.

4. There is no cure for glaucoma.

Additionally, damage done to the optic nerve as a result of glaucoma cannot be reversed. Even after undergoing treatment, patients must be monitored to make sure the aqueous humor drains properly.

5. However, there are treatment options to slow the onset of glaucoma and prevent further damage to the optic nerve.

For many people, pills and medicated eye drops may effectively treat their glaucoma. For others, surgery may be the best option. A selective laser trabeculoplasty, a procedure performed here at OCLI, uses an ultra-low frequency laser to target the Trabecular Meshwork, allowing fluid to drain correctly and relieving pressure in the eye. A second procedure, an endoscopic cyclophotocoagulation (ECP), targets the ciliary body in order to reduce the amount of fluid produced. The reduction in the volume of fluid in the eye allows the aqueous humor to drain at the same rate at which it is made.