Check out our LASIK the Refs caps

Well, I made it to Yankee Stadium last night to watch game 2 with my daughter.  It was a great game, won by the Yankees 3-1.  Once again the umpires reconfirmed their need for LASIK!  Lucikily the 2 bad, offsetting calls by 1st base umpire, Brian Gorman, did not affect the outcome of the game.

Reported in the New York Times:

The first disputed play occurred with the Yankees batting in the seventh. Ahead, 3-1, the Yankees had Melky Cabrera at second and Jorge Posada
at first with one out. Johnny Damon pulled a low line drive to first.
Howard scooped the ball with his glove on the ground and Gorman ruled
an out. The Yankees thought the ball hit the ground.

Howard
immediately threw to second base, where shortstop Jimmy Rollins applied
the tag while Posada was standing on the base, and Posada was ruled out.

When asked about the play, Howard was evasive. “Did I catch it?” he asked. “Well, they called him out.”

Yankees Manager Joe Girardi
argued vehemently and told his players not to take the field while the
umpires conferred between innings, but none of the umpires saw the play
differently, so the ruling stood. 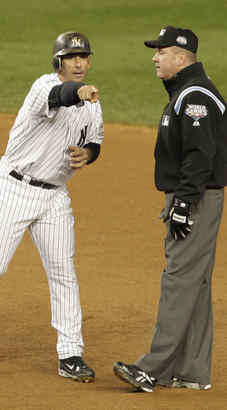 I must have received 10 phone calls and texts from friends at home, watching on TV fuming over this call.
Unfortunately, they must have a policy in Yankee Stadium of not showing the instant replay of close calls.  This is probably wise, as there might
have been a riot.

With all the bad calls this post season there has been a renewed interest in instant replay.  According to ESPN.com:

MLB commissioner Bud Selig said he has been soliciting outside opinion
from managers and general managers the past few weeks and said no one
offered a good explanation why the umpiring was so bad in the first
rounds of the postseason.

"The more baseball people I talk to, there is a lot of trepidation
about it and I think their trepidation is fair," Selig told reporters
before Game 2 of the World Series on Thursday. "I've spent a lot of
time [on this] over the past month and will spend a lot of time in the
ensuing months as well. I don't want to overreact. You can make light
of that but when you start to think you're going to have more
intrusions — and even if their good intrusions — it's something that
you have to be very careful about. Affecting the game on the field is
not something I really want to do."

Personally, I don't think instant replay is the answer, sometimes the umps still get it wrong after a review:

“We looked at the replay and it looks like a catch,” said the crew chief Gerry Davis, who was the right-field umpire for Game 2.

Obviously the entire umpire crew got it wrong, both during the game and after the game as well!  I again make my offer to MLB:  Send your umps to me at the conclusion of the season, I will be happy to provide LASIK to them, free of charge..  anything to improve the officiating.  CALL ME!

Its off to Philly tomorrow nite, I will hopefully score some tickets, watch a better officiated game, and a Yankees win! 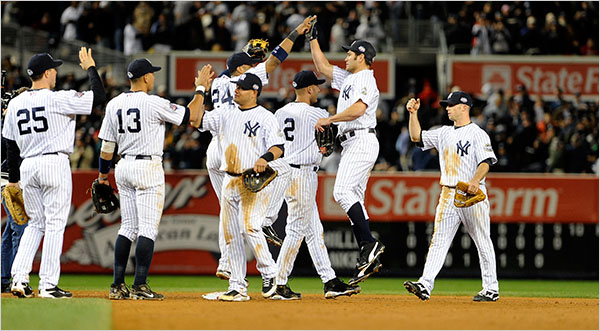