Troubled by floaters? Now we can zap them

Have you ever been looking at something and suddenly seen what appears to be a strange foreign object snaking across your field of vision? A squiggly-looking line or a small blob? Then when you try to focus on it to determine what it is that you’re seeing, it appears to just rush away?

You’ve had an experience with a “floater,” and OCLI is pleased to say we are now able to eliminate that experience from your life.

An eye floater is caused most often by age-related changes to the vitreous fluid, the jelly-like substance, in the eye. The vitreous becomes more liquid, allowing microscopic fibers to clump. The vitreous gel then can pull away from the back of the eye, causing a detachment.

This posterior vitreous detachment is common in people who are nearsighted, who have had YAG laser surgery, have had inflammation inside the eye, or have undergone a cataract operation. Floaters can appear suddenly, along with sudden flashes of light or a loss of peripheral vision.

It used to be that when this condition reached the point that someone needed to visit their ophthalmologist for treatment, the remedy was a vitrectomy. This was a surgical procedure in which the vitreous fluid in the eye was removed and replaced with a saline solution. The procedure has a wide range of side effects, including cataracts, raised pressure in the eye, infections, damage to the eye’s lens, and retinal detachment.

The procedure that Dr. Karickhoff perfected has an extremely low complication rate, with only one patient in the last 15 years experiencing any complications.

What is Dr. Karickhoff’s procedure?

In this procedure, a laser lens is placed directly on the eye of the patient. The YAG laser is then focused on the floaters within the eye. The laser is designed to emit a burst of energy that lasts only 0.000000003 seconds. In that three nanoseconds, the laser’s pulse will convert the floater into a gas which the eye will absorb over time.

Unlike a vitrectomy, which carries its risks of infection and complications, vitreolysis is pain-free and non-invasive.

Vitreolysis has been refined over the years by the development of new technology. The devices today that allow an ophthalmologist to destroy the floaters in your eye have increased in accuracy, which has helped reduce the already very low complication rate for the procedure. Devices like the Ultra-Q laser have been specifically approved by the Food and Drug Administration for the procedure and have been continually tested for accuracy and safety. So you can rest assured not only that your eye specialist has received the best training for the procedure, but also that he or she is using one of the most advanced medical laser systems in the world.

Dr. Silverman and the team at OCLI want to provide you with all the information you need about the procedure to rid you of those troublesome floaters. We’re very pleased to be able to offer this service, and we want to make sure you have all the information you need to make the best decisions about your eye health. If you’re ready to get those annoying little specs removed from your field of vision, the team at OCLI stands ready to help you. Contact us today. 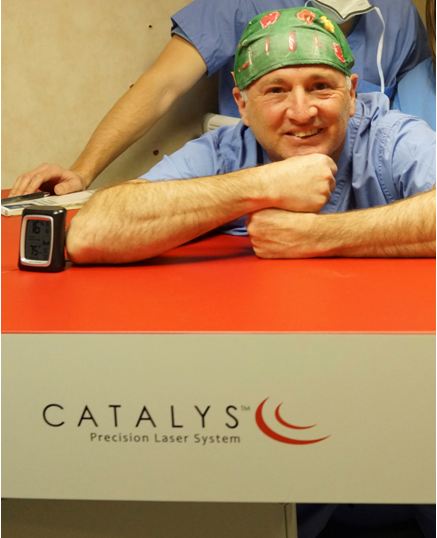