A new strain of corn may have many benefits to the health of our eyes.

It is no secret that many types of fruits and vegetables can have positive effects on our health. Spinach really can help to make you grow big and strong, as Popeye always suggested, and it’s not just a rumor that carrots can help to improve eyesight over time. However, while neither of these helping foods can be deemed as a “vision miracle”―they won’t cause a blind man to start seeing―they can provide certain health benefits to our eyes that can help to improve our sight to some degree. 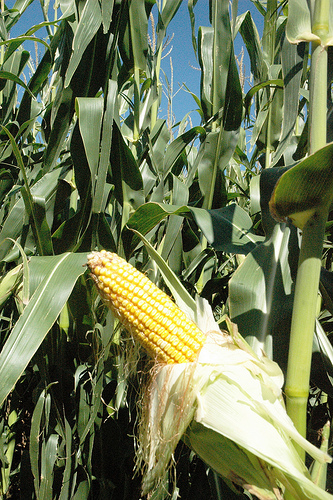 New types of beneficial vision foods are even being discovered every day by scientists in the field. For instance, researchers at the University of Guelph have recently developed a particular strain of corn which may be able to help the fight against macular degeneration in older people.

Macular degeneration, or more commonly age-related macular degeneration (AMD), is a disease that is typically associated with aging and affects the macular―the part of the eye that allows you to see fine detail. As one gets older, the disease gradually destroys sharp, central  vision and can sometimes lead to a total loss of vision if not caught early enough.

Unfortunately, AMD typically advances so slowly that, by the time people notice a significant change in their vision, most of the macula has already been destroyed. The can affect our ability to see objects clearly and complete daily tasks, such as reading and driving.

Luckily, this new breed of corn has a particularly high level of antioxidants, specifically lutein and zeaxanthin, which are known to protect against this dangerous age-related disease. Because older adults usually have low levels of antioxidants anyway, this makes them much more susceptible to the illness.

According to plant researcher Elizabeth Lee, the University of Guelph team began extracting genetic material for this corn from South American maize in 2000, then crossed it with North American corn to create a new variety with higher levels of the beneficial antioxidants.

“Corn naturally has low levels of (lutein and zeaxanthin), but this corn has higher levels than anything ever reported,” said Lee.

However, the scientists behind the study are not just suggesting that people with AMD eat the new corn strain in order to reap the benefits of healthy eyes. Instead, the team has been feeding the corn to laying hens, which in turn produced eggs with high levels of antioxidants. This finding could not only prove to be very beneficial to consumers and egg producers, but it could also open the doors to a new potential market for corn producers, growing the specialty corn for chicken rations.

In addition to producing eggs with high levels of lutein and zeaxanthin, Lee also suggested that her team will begin thinking of creating a new strain of sweet corn as well that could help to fight against this disease.

What do you think about this new strain of corn that could help patients with AMD? Do you believe that there are certain foods out there that can improve our eyesight? Let us know your thoughts in the comments below!