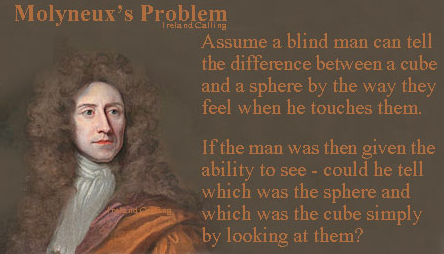 Almost 400 years ago, philosopher William Molyneux, whose wife was blind, sparked debate about the ability of a blind person from birth to distinguish between a cube and a sphere by touch. Philosophical camps were divided into those who believed that certain qualities, such as the roundness of a sphere, were innate and shared among all the senses while the other group insisted that eyes must have seen the roundness.

He first posed the question to John Locke in 1688. A few years later, Locke published what he would christen as ‘Molyneux’s Problem’ in “An Essay Concerning Human Understanding.” His opinion was no. “He would not be able with certainty to say which was the globe, which the cube, whilst he only saw them,” he wrote, “though he could unerringly name them by his touch.” For Locke, the connection between the senses was learned.

Dozens of philosophers have pondered the question, including such luminaries as Voltaire and Adam Smith. In the early 18th century, studies were conducted with patients who suffered from congenital cataracts which were removed in adulthood.

But according to the authors of the new experiment, Richard Held, lead author, and Dr. Pawan Sinha, senior author, of the Massachusetts Institute of Technology, prior studies have been woefully inadequate. They neither established how well a patient could see afterward, nor tested soon enough after surgery to ascertain the immediate effects on a subject completely inexperienced with vision.

This new research appears to agree with Locke. They essentially concluded that although the brain does not automatically make sense of what the eyes are taking in, it can very quickly learn to do so.

Working with five subjects from rural northern India, four boys and a girl, blind since birth, in ages ranging from 8 to 17 were given operations to restore their sight. One suffered from a disorder of the cornea and the remainder with cataracts. Some could perceive light but none could see objects. After their procedures, all were able to see at 20/160 or better, well enough to distinguish objects.

Tested within 48 hours of their operations, researchers placed 20 small plastic objects on a table where they could been seen, but not touched. They were given the same objects to feel under a table, unseen. They were asked to match those objects they felt and saw.

Matching one object with another by touch or sight alone resulted in an almost 100% performance. However, when asked to correctly identify similar objects they had felt with an object seen, their performance dropped to just a smidgen better than chance.

In spite of the challenges, improvement was rapid. A co-author of the study, Yuri Ostrovsky, a postdoctoral fellow at M.I.T. said one child was proficient in less than a week. In fact, within three months, all the children correctly matched objects in more than 80 percent of the time.

Pawan Sinha, professor of vision and computational neuroscience at M.I.T., believes that answering the philosophical question is not the only benefit.

“This paper strengthens the case that cross-modal learning is possible despite years of deprivation,” Dr. Sinha said. “That’s very important from a clinical perspective because it argues for making a treatment available to all, irrespective of age. Children beyond 6 or 7 are not beyond the correctable age. The brain retains its plasticity well into late childhood and even into adulthood.”