We don’t like to hear about it, and we certainly don’t want to see it. But it happens . . . every year at this time: fireworks-related injuries and even deaths. Yes, such thoughts can dampen the 4th of July celebratory mood, but it’s something we all need to keep in mind, especially when young children are concerned.

A few statistics first.  According to the National Fire Protection Association, 9,600 fireworks-related injuries were treated in US hospital emergency rooms in 2011, and 89% of those injuries involved fireworks that federal regulations allow consumers to use at home. Smaller fireworks such as sparklers, fountains, and novelties accounted for 34% of the injuries seen in emergency rooms  (Wisconsin Department of Health Services, “Fireworks Data and Statistics”). 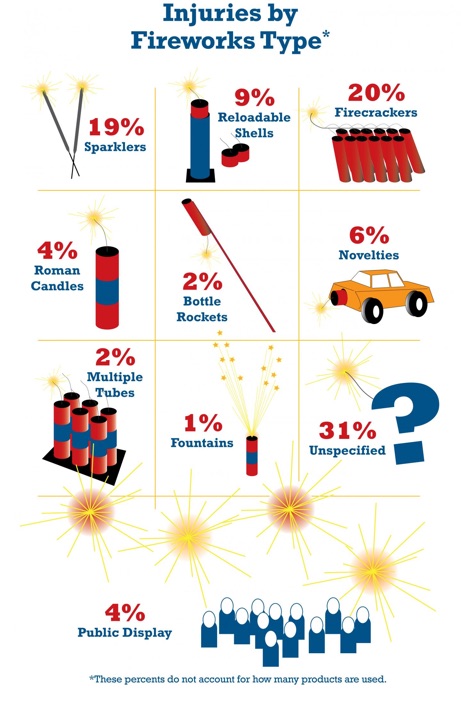 (Newsweek, “HOW MANY PEOPLE GET INJURED BY FIREWORKS ON THE 4TH OF JULY?”)

In 2015, 11 people died as a result of fireworks-related injuries, and around 11,900 people were seen in hospitals for injuries caused by fireworks. Most of these fireworks injuries involved the extremities, especially hands and fingers, around 32%. An estimated 16% were to the eyes (Washington DC Patch, “Fourth Of July Firework Injuries: Most In 15 Years, New Report Says”). 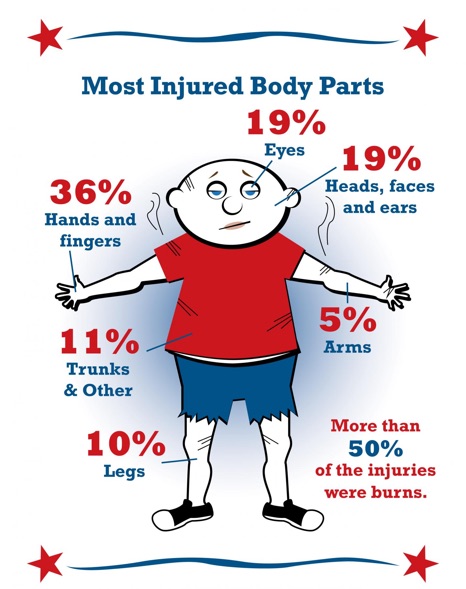 ((Newsweek, “HOW MANY PEOPLE GET INJURED BY FIREWORKS ON THE 4TH OF JULY?”)

In addition, just a little over a quarter (26%) of those suffering fireworks injuries are under the age of fifteen (Wisconsin Department of Health Services, “Fireworks Data and Statistics”). Those in the age range of 15 to 19 have the highest incidence of injuries, and children aged 5 to 9 are next  (Washington DC Patch, “Fourth Of July Firework Injuries: Most In 15 Years, New Report Says”). Further, in the three years leading up to 2015, eye injuries more than doubled (USA Today, “Eye injuries caused by fireworks doubled in last 3 years”).

And it can happen to anyone. New York Giants star Jason Pierre-Paul’s right hand was severely and irreparably maimed in a fireworks accident. He was attempting to relight a seemingly dead firework when it exploded near his hand. As a result, Pierre-Paul has appeared in some public-service announcements to alert other people to these dangers.

It’s always worse, though, when it happens to young people. When he was 16, Jameson Lamb suffered a severe eye injury in a Roman candle accident. After undergoing multiple surgeries, partial cornea transplants, and eyelid reconstruction, he has regained some of his eyesight (USA Today, “Eye injuries caused by fireworks doubled in last 3 years”).

It’s probably best, then, to leave the lighting of fireworks to the experienced and the pros. Enjoy the fireworks displays available in your area and remain injury free. You can find out more about some of New Jersey’s fun and fabulous 4th of July festivals and fireworks displays here.

Again, please, be careful and safe throughout your Independence Day celebrations to protect your eyesight. At OCLI, we care, and we’re on the cutting edge of new developments in laser eye surgery. For a LASIK consultation, just give us a call to get started on the path to great vision.