Flomax and IFIS – What Your Primary Physician Needs to Know 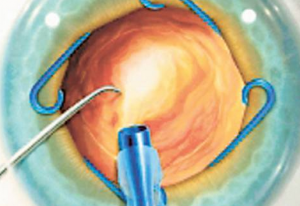 Just this month, I spied the following question posed to Dr. Roach, a medical columnist for the St. Louis Today, prompting me to once again refocus my attention and energies on the importance of the ongoing discussion surrounding the problem of IFIS (Intraoperative Floppy Iris Syndrome) and its implications for patients taking Flomax (Tamsolusin) and facing cataract surgery.

Dear Dr. Roach, I am nearing the age of 70 and have been on Flomax (tamsolusin) for benign prostatic hyperplasia (an enlarged prostate) for three years. My ophthalmologist would like me to be on another medicine to avoid complications during cataract surgery for patients using Flomax.

I raised this issue with my regular doctor and received terazosin (Hytrin or Zayasel). My ophthalmologist says this also can affect pupils during cataract surgery, and is being extra cautious even though no mention has been made of surgery in the near future. From my research, this is a common concern. Is there a medicine for BPH that is safe for people with cataracts? — V.A.P.

Dr. Roach does a great job of distilling the problem, clearly explaining the root of the problem: Tamsolusin (Flomax) is an alpha blocker that relaxes muscles in the prostate, promoting better urinary flow. This same drug, however, may have a similar effect on your eyes, complicating surgeries on them.

However, it was his next sentence that alarmed me:

“Until reading this letter and doing the research, I was one of the 96.8 percent of primary care doctors who are unaware of this association.”

Furthermore, he goes on to state that most cataract surgeons responding to a recent survey who had BPH themselves would refuse an alpha blocker if they saw signs of a developing cataract or would undergo surgery before treatment of their BPH.

So, even though cataract surgeons such as myself are clearly aware of the dangers of complications caused by Flomax in cataract surgery, it appears that there is a clear disconnect and lack of attention on the part of the medical community in general.

I first became alarmed about this widespread problem back in August of 2008. With the rising popularity of Flomax among my older male patients, I published a post outlining a series of recommended steps:

A study published in the Journal of the American Medical Association in May of the following year confirmed many of my fears. In a study of 96,128 men, ages 66 and older, who had undergone cataract surgery, 7.5% of those taking Flomax in the two weeks before surgery had serious complications, including retinal detachment and inflammation, while only 2.7% of those not taking the drug experienced such complications.

Previously, I outlined the recommendations of The Academy and the American Society of Cataract and Refractive Surgery (ASCRS) as follows:

1) A patient should advise his or her ophthalmologist if he or she currently uses, or previously took, an alpha-blocker such as Flomax.

2) A patient should not decide to discontinue these drugs without first consulting his or her prescribing physician.

3) If he or she already has cataracts, the patient may wish to consult with his or her ophthalmologist before starting an alpha blocker for the first time.

The patient advisory emphasizes that if the ophthalmologist is made aware of the drug history, the success rate is still excellent and there is no need to delay or avoid cataract surgery that has been recommended.

While all of this advice is inconvertibly sound, it does not address the urgent need for the primary physician to advise a patient about its implications before prescribing Flomax. Two studies have indicated that:

“Even if a patient has only taken Tamsulosin once in their life, that dose is enough to cause IFIS during cataract extraction indefinitely.”

Given the findings of these studies, every doctor recommending Flomax should first inform their patients of the higher risk of IFIS when Flomax is prescribed. In fact, I believe it is their duty as a physician to strongly advise a thorough examination by an Ophthalmologist before they write that first prescription. Once the patient ingests that first dose, they’re at increased risk for IFIS.

Of course, this option is closed to millions who already enjoy the benefits of Flomax in treating their prostate problems. When faced with cataract surgery, their best course of action is to find a doctor who not only recognizes the potentially higher risks, but has vast experience in dealing with IFIS in surgery.