Since video games became a childhood household staple nearly 30 years ago, they have been met with a lot of criticism and uncertainty from people all over the world. Doctors were suggesting that these pixilated graphic images could do damage to a child’s vision, while parents everywhere were doing whatever it took to get their kids away from the video game controller and outside with their friends.

However, as we became more familiar with these entertainment devices and took a closer look at them, both parents and doctors began to realize that maybe these games were not as dangerous as they seemed. For instance, while many people once believed that sitting too close to the TV or playing video games for too long could have a dangerous affect on a child’s vision, it was recently announced that there is no scientific proof that shows that sitting too close to the television will cause any kind damage to your vision. The worst that could happen is getting eye strain or a stiff neck after sitting close for too long. 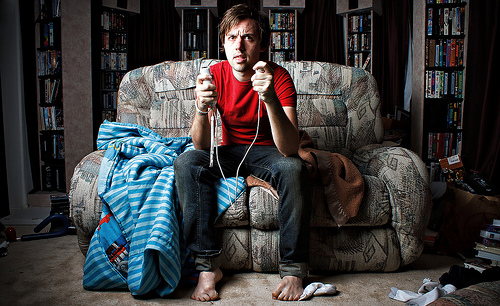 In fact, when it comes to recent discoveries and research surrounding video games, many doctors are now suggesting that these entertainment systems may actually hold a certain amount of benefits for certain vision ailments.

According to one psychologist at McMaster University in Canada, 40 hours of fun, action-packed video gaming can actually help to improve the vision in adults who were born with congenital cataracts. Dr. Daphne Maurer in Vancouver, who is globally known for her work on the phenomena of synasthetes, recently presented these findings to the American Association for the Advancement of Science (AAAS) and shared how video games may actually help improve reverse failing eyesight in those who suffer from this common disease.

For many, the formation of cataracts is a natural part of the aging process, causing the eye’s natural lens to cloud and distort vision. The lens is held inside a capsule, and is made of mostly protein fibers and water arranged precisely so as to permit light to pass through without interference. Over time, these fibers begin to break down and cluster together, clouding the lens. As more fibers break down, the clouding becomes denser and covers a greater area of the lens.

While cataract surgery has long been the best way to improve cataract vision and achieve excellent near and far vision without glasses, this recent study done by Dr. Maurer suggests that video games may also have added benefits for those born with the condition.

The experiment was initially conducted on six adults between the ages of 19 to 31 who had been born with cataracts, and were asked to go on a program that tasked them to play first-person shooting games, which involved the use of strategy, vigilance and attention to detail for a period of 10 hours weekly for four weeks. Once the prescribed period was over, those who participated in the study showed a marked improvement in terms of being able to detect subtle differences in contrasts, focusing and following small moving objects, and reading fine print.

However, while these findings are exciting and encouraging for people born with congenital cataracts, the use of IntraOcular Lens Implants (IOL) through cataract surgery is still the best way to improve vision for people who suffer from this condition. With a standard lens implant, glasses or contacts may still be needed following surgery. However, with new, premium IOL implants, only reading glasses, or sometimes no glasses at all, may be needed after cataract surgery. These premium lenses also help to simultaneously correct vision at near, intermediate and distant ranges.

For more information about cataracts and premium IOL implants, or to determine whether or not you are a good candidate for cataract surgery, be sure to contact OCLI today for a free vision consultation.