New study suggests there may be a link between green tea & improved eye health.

Over the last few years, there have been many studies that have been released which suggest that drinking green tea may provide you with numerous health benefits. For instance, green tea has been linked to improved brain function, increased fat burning, lowered risk of various types of cancer, and even a lowered risk of diseases such as Alzheimer’s and Parkinson’s. With more and more research coming out each year regarding the benefits of green tea, is there any chance that this super drink may also have a positive impact on our eyesight? A new study thinks so! 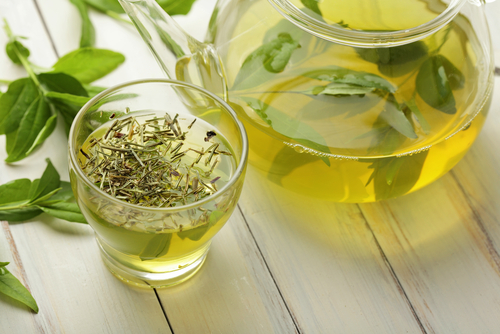 A recent report on green tea released by Biosyntrx Nutritional Biotechnology suggests that drinking green tea may help to improve your eye health and combat dry eyes. This is primarily due to the significant health-promoting actions found in it’s rich content of antioxidant compounds epigallocatechin gallate (EGCG) and catechins.

According to the Biosyntrx article, “Catechins scavenge for free radicals that damage DNA and contribute to cancer, blood clots, and atherosclerosis . A Chinese study suggests that EGCG is able to protect retinal ganglion cells against oxidative-stress injury and may be used as a potential neuroprotective drug.” ¹

The fact that the compound EGCG helps to protect retinal ganglion cells against oxidative-stress injury is very significant for vision health, as the retinal ganglion cell is a neuron that is located near the inner surface of the eye’s retina and helps to transmit image-forming and non-image forming visual information from the retina to several regions of our brain.

“Other benefits ascribed to EGCG include antioxidant and anti-inflammatory activity, supporting cardiovascular health, protection against UVB radiation, and inhibition of cell membrane damage (more effectively than vitamins E or C), insulin-mimicking action, bone-building, and increased 24-hour thermogenesis (fat burning) in humans,” according to the Biosyntrx article. ¹

Catechins are also very significant to our vision health, as they are among a number of different antioxidants (also including vitamin C and vitamin E), which help to protect the delicate tissues of the eye from eye diseases such as glaucoma.

Another study which looked closely at the relationship between catechins and vision health was published in the Journal of Agricultural and Food Chemistry, and featured laboratory rats that were feed green tea extract and then had their eye tissues analyzed.

According to research published on WebMd.com, “The results showed that different parts of the eye absorbed varying amounts of catechins. The area with the highest concentration of catechins was the retina, which is the light-sensing tissue that lines the back of the eye. The area with the least absorption of catechins was the cornea, which is the clear, outer layer of the eye. The study also showed that a measure of antioxidant activity lasted for up to 20 hours after the drinking green tea extract.”²

Given the many studies that are being released linking improved vision health to green tea, it may just be advantageous to replace  your morning cup of coffee with a little green tea once in a while! You may find that your eyes will thank you in the long run.

What do you think about these studies? Do you think that green tea could actually help to improve your eyesight in the long run? Let us know your thoughts in the comments below!