Avastin vs Lucentis: Will The Greed of Genentech and Some Retinal Surgeons Bankrupt Medicare?

Much of the information I present here has been taken from the Patent Docs Blog. 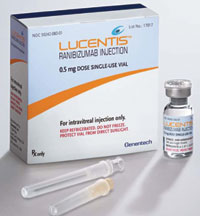 Macular degeneration is the leading case of blindness in patients over the age of 55 in the United States. It affects about 10 million Americans. Lucentis, manufactured by Genentech is the number one approved drug for the treatment of neovascular or "wet" AMD, a condition that if left untreated leads to blindness. Treatment with Lucentis is not a cure,for it merely stabilizes the wet form of macular degeneration, and in many patients prevents the condition from worsening.  This means that it must be administered as a maintenance drug.  At a cost of $2,000/dose and a once-a-month dosing schedule, the cost to treat the half-million "wet" AMD patients in the U.S. would be greater than $10 billion per year!  This is more than the entire Medicare budget ($4.77 billion in 2006) for all of ophthalmology (cataracts, diabetes, glaucoma, and everything else) combined.  In 2004, the entire Medicare Part B budget for all drugs for all medical fields was $12 billion! 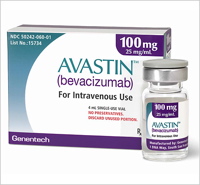 Genentech makes another drug used in the treatment of certain cancers, Avastin.  Avastin has been used by many retinal surgeons in an "off label use" to also treat macular degeneration.  The results with Avastin appear comparable to the results with Lucentis.  Avastin is so much cheaper than Lucentis. It is priced at $600/vial for intravenous use, but is injected into the eye at such small doses (0.1cc) that each vial can deliver 30 doses ($20/dose).

Genentech has opposed the off-label use of Avastin. Genentech has warned ophthalmologists that there is a greater risk of stroke using Avastin.  However, the increased stroke risk was seen at the therapeutic dose for cancer patients, which is 400-fold higher than the dose used to treat AMD.  Recently, Genentech also reported that certain doses of Lucentis used for AMD are also associated with an increased risk of stroke.

I recently received this e-mail from a concerned retinal surgeon, and have decided to publicly share it:

US sales of Lucentis were $236 million for the 4th quarter, a 20% increase over 2007 4th quarter sales of $197 million. Total 200 8 sales were $875 million, a 7% gain over 2007 sales of $815 million.
I was recently at a retina meeting in New York City, and most people I
talked to use primarily Avastin. Some use Lucentis as their first-line
anti-VEGF, if their patients have secondary insurance. They generally
pointed to FDA approval as their rationale. Nobody told me that, in their
experience, Lucentis has a better safety or efficacy profile. Why have
Lucentis sales been steadily rising? One might expect that, as our
experience with Avastin grows and as long as people continue to find Avastin
safe and efficacious, Lucentis use should decline. I wonder whether a recent
article in Retina Times offers insight. One practitioner said that he uses
Lucentis much more now because his office has streamlined reimbursement
issues. Does the extra $80 income per dose (and the likely
need for more
frequent injections) influence practice patterns? Whatever the motivation,
our burdening Medicare will ultimately mean that sometime, probably in the
not-so-distant future, Medicare cuts will result in some patients not having
access to valuable medical services and some of us not being able to
maintain viable practices.

So here we have 2 medications made by the same manufacturer, both provide very similar therapeutic results.  One costs $2,000 a dose, the other $20 a dose.  I ask you, what is driving the sales of Lucentis? I will allow you to answer this yourself.
BOTTOM LINE:  When I have a patient with a diagnosis of macular degeneration in need of anti-VEGF therapy, I will not refer them to a retinal surgeon who uses Lucentis as their primary treatment modality.  The buck stops here!
For additional information: