3D Movies: How They Work & Their Effects On Your Eyes

What to know before you see the biggest 3D Blockbusters this summer.

Summer is one of the most popular times of the year for new, exciting blockbuster films to hit movie theatres. Since kids are on summer vacation from school and many people will do anything to escape the summer heat in a relaxing, air-conditioned place, many movie studios save some of their most exciting films of the year for the summer season, including their biggest 3D films. 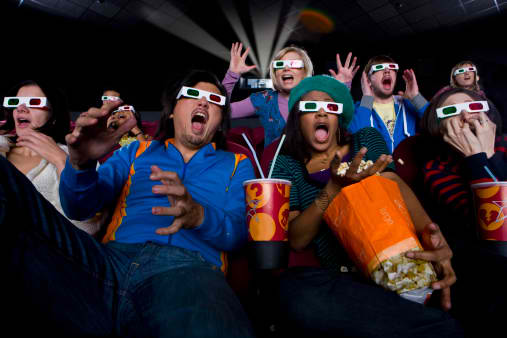 This summer brings with it more 3D Blockbuster hits than ever before―Kung Fu Panda 2, Green Lantern, Cars 2, Transformers: Dark Side of the Moon, Harry Potter and the Deathly Hallows Part 2. However, movies aren’t the only places in which 3D technology seems to be taking over. Consumers are now being offered 3D technology in many forms including televisions, computer games, cell phones and even in the classroom as a learning tool.

However, while 3D movies have definitely improved since their short-lived popularity in the ’80s (Michael Jackson’s Captain EO, anyone?), many people are still questioning the effects that these eye-popping, in-your-face flicks can have on your vision.

Are 3D Movies Safe For Your Eyes?

Studies  have found that 3D viewing is relatively safe for most people. This is because when you are in a movie theatre, you are generally a good distance from the screen, therefore your eyes are not strained while trying to look at the image. However, like normal movies or TV shows, watching 3D images for a prolonged period of time, or at a close distance, may cause eye strain or dry eyes.

In fact, watching 3D films may actually help to uncover subtle vision disorders in those who have problems with binocular vision. This common vision problem, affecting anywhere from three to nine million people, is the ability to align both eyes accurately on an object, combining the visual images from each eye into one single, in-depth perception (an act that is essential for viewing a 3D image). Therefore, if a person has trouble viewing a 3D movie or doesn’t see the image as vivid as those around them, they may suffer from poor binocular vision.

Are 3D Movies Okay For Children?

While no detrimental effects of viewing 3D films have been reported at any age, many doctors still recommend that only children over the age of three enjoy viewing 3D movies, television or games. This is because it isn’t until age three in which most children develop binocular vision well enough to watch these types of films.

However, it is important that with any child, even those over the age of three, parents pay attention to their reactions to 3D films. Be sure to consult an eye doctor if they complain of excessive eye strain, headaches, dizziness, nausea or uncomfortably after viewing a 3D film.

What Are the Common Side Effects of 3D Films on Vision?

The American Optometric Association has putter together a list of the three D’s of common 3D vision problems:

When going to check out the latest blockbuster hits at the movies this summer, be sure to pay close attention to how the film is effecting both you and your child’s vision. As long as you view 3D movies safely and cautiously, they can be a great treat for your whole family this summer.